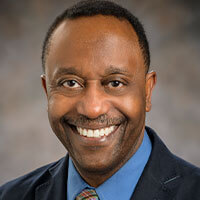 Dr. LeRoy is a member of the Alpha Omega Alpha Honor Medical Society, a Fellow in the American Academy of Family Physicians, and the Golden Key Honor Society-Wright State University Chapter. He has been recognized as one of America’s 50 Most Positive Physicians. Also, as the Miami Valley Family Physician of the Year and the National Registry of Who’s Who in America. Dr. Le Roy received the Wright State University Outstanding Alumni Achievement Award, the Dean’s Award to the Outstanding medical school graduate, a Certificate of Recognition-Ohio House of Representatives and Ohio Senate, the American Association of Medical Colleges Humanism in Medicine Award, the Outstanding Volunteerism Award from Reach Out of Montgomery County, the Humanism in Medicine Award-Gem City Medical, Dental and Pharmaceutical Society, Dayton’s Top Ten African American Male Award, the National Council of Community and Justice Humanism Award, and both the Educator of the Year and Philanthropist of the Year awards from the Ohio Academy of Family Physicians.

In addition, Dr. LeRoy is a practicing part-time physician at Community Health Centers of Greater Dayton, a federally qualified health plan. Dr. LeRoy’s practice is at the East Dayton Health Center, where he has practiced for over 25 years.