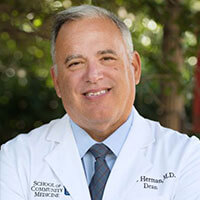 Dr. Herman came to OU from the Penn State College of Medicine and the Milton S. Hershey Medical Center. Since 1991 he served as the Hershey Company Professor and Chairman of the Department of Family and Community Medicine. During his tenure as chairman, he successfully led that department’s development from a small department into a large department with a range of special clinical and academic programs. At Penn State, he also held Associate Dean of Primary Care and Primary Care Research and director of the Center for Leadership, in which he led a special program in “Leadership” that dealt with change at the Penn State College of Medicine.

Dr. Herman is a member of many professional organizations and has been appointed to serve on many national committees. He was the project director on 15 National Area Health Education Center grants. He served as principal investigator on many grants and has published numerous papers on assessing clinical practice support and physicians’ needs in rural Pennsylvania health care. He served as the director of the North American Primary Care Research Group from 1988-1995. Other interests and areas of publication include stroke care, clinical epidemiology, and patient preferences in medical practice.